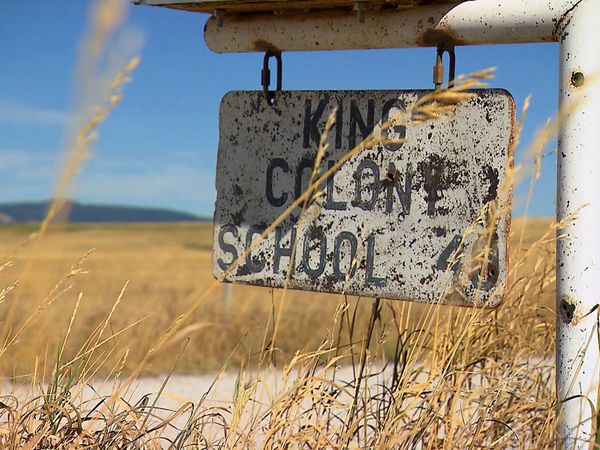 “Shunning means, we want no part of you.” [Bertha]

“Actually, the main reason we go to school is to play sports.” [Carver]

“I hope the elders are happy for [sic] what they did.” [Claudia]

As I begin my second episode reflection, I am contemplating several responses to the first. I was worried that my perspective would be too far removed from the Dariusleut viewpoint, but as one reader pointed out, anybody who listens with a careful ear to the Hutterite teachings, which all Hutterites share, should see that something doesn’t line up with the American Colony portrayal. Writing this episode’s reflection has been challenging because the show deals with a spiritual concept in a very secular manner.

The central point here is the conflict of whether or not to send the Hutterite youth to the local public high school. The larger Hutterite community and ‘the elders in Canada’ do not approve, but some of the people of King Ranch Colony seem OK with it. As a result the parents who refuse to withdraw their kids from school are put in ‘Unfriedn,’ or shunned.

In the meantime, the young punks in the show confirm the worst fears of the elders with their shenanigans and tomfoolery. The portrayal certainly does not help argue their case; sending them to high school in town seems to have no positive effect on their character.

The episode is called “The Shunning” which reminds me of the dreadful novel series by Beverly Lewis with the same title. It has, unfortunately, the same disjointed/out of context representation of a divine process.

“If the elders find something that they don’t like, they are going to punish it, and that punishment is called shunning.” [Rita]

Without giving any further background whatsoever to the biblical and traditional Anabaptist framework that undergird this discipline mechanism, it seems pretty barbaric indeed. Members of King Ranch feel that this is an unfair and unwarranted punishment because of the very real disconnect and indeed, an antagonistic relationship with their spiritual leaders. This further underscores the ‘us vs. them’ mentality I discussed in the previous reflection.

At it’s most basic level, Unfriedn, which is literally ‘un-peace’ but usually translated as shunning, is a parting of ways between the church and a wayward or unrepentant member. At its best it is a mechanism by which a believer can be restored to full membership within the body of Christ. At its worst, it is a soul-crushing device that an ungodly or unwise leader can use to manipulate the people he has been charged with pastoring.

Shunning can be a way of saying, “We love you, but the mandate of Christ demands that we send a strong message to you about your behaviour. We must part ways so that the purity of the church may be maintained.” In the early years of the Hutterite church, this discipline mechanism was an effective, if overused, way of dealing with unfaithfulness. However, as the church institutionalized its use became influenced by personality clashes and family feuds and it became a powerful cudgel leaders could use to corral followers.

My good friend and colleague, Jesse Hofer, an emerging Hutterite historian and theologian in his own right, observed the following abstracts about shunning:

“The practice of shunning arose out of a biblical culture where community still had meaning and resonance. If you were shunned in the ancient world, you very literally cut yourself off not only from your family and social group, but from the very resources necessary for survival. An individual was essentially a nobody apart from a community. In our perversely individualistic culture, the individual has asserted himself to such an extent that shunning becomes meaningless: how dare the community determine for me what counts as acceptable and right? I have the right and the reason to figure it out for myself. Shunning rightly belongs under the larger umbrella of practices known as ‘church discipline.’ It is but one of the practices at the community’s disposal to lead the sinner to repentance (Matthew 18).”

This biblical model is violated on several levels in this episode of American Colony. To begin with, it appears that shunning is the primary, or even sole, tool available for the church to deal with conflict. Jesse further comments that, “Church discipline presupposes a church whose members are serious and intentional enough about its moral life to submit to mutual correction and accountability. Shunning can also be thought of as the community giving the individual an opening or a space for penance, following and reinforcing repentance of sin. It is a practice that should be entered voluntarily and not forced upon somebody.”

Two years ago I organized a short lecture series with a Mennonite professor of history and theology from the Canadian Mennonite University, Dr. John J. Friesen. I asked John to speak about the application of historical knowledge and its bearing on the past, present and future, which he did in his usual thorough manner. In addition to this topic, John also spoke about restoration and restitution in a church setting. He told the story of the Dutch-Mennonite leader who ended up shunning everybody in his congregation except himself and his wife—and he had questions about his wife!—because they disagreed with him.

As Hutterites we have long looked down our nose at some of our Mennonite friends for abandoning the biblical practice of shunning. Because of this, it didn’t take long for somebody in the audience to ask John, “Why did the Mennonites stop using shunning?” John paused for a moment, stroked his goatee, and said gently but with emphasis, “Because it was misused we had to find better ways to deal with conflict.” When Unfriedn, as portrayed in American Colony, is misused, or viewed and exercised as a punishment, it is ineffective and certainly beyond the bounds of biblical application.

A present day example of shunning in use is the schism among the Schmiedeleut in Manitoba. Here it is a means by which former brothers and sisters in Christ can indicate to each other that there is a rift that needs to be healed—a relationship that needs to be restored before we can whole-heartedly participate in a shared life of Christian service and participate together in Christian rituals such as marriage, funerals and, of course, the great symbol of Christian unity, Abendmahl, the Lord’s Supper.

At this point, based on comments on this blog and elsewhere, a new question is emerging for me: What if, just what if, the portrayal of Hutterite life as seen in American Colony is a reality for some Hutterites? What if some of our friends or brothers and sisters have become divorced from our spiritual heritage? If this is the case, perhaps a different approach entirely is needed here.

Jesse proposes that, “There are indeed many dysfunctional communities among us. It seems to me that perhaps the proper response to the negative exposure might be, not a knee-jerk defence, but collective repentance and renewal. National Geographic, in the end, may be God’s prophetic instrument shaming us to our senses.”

Please participate in the discussion. Keep it clean and civil. Cancel reply